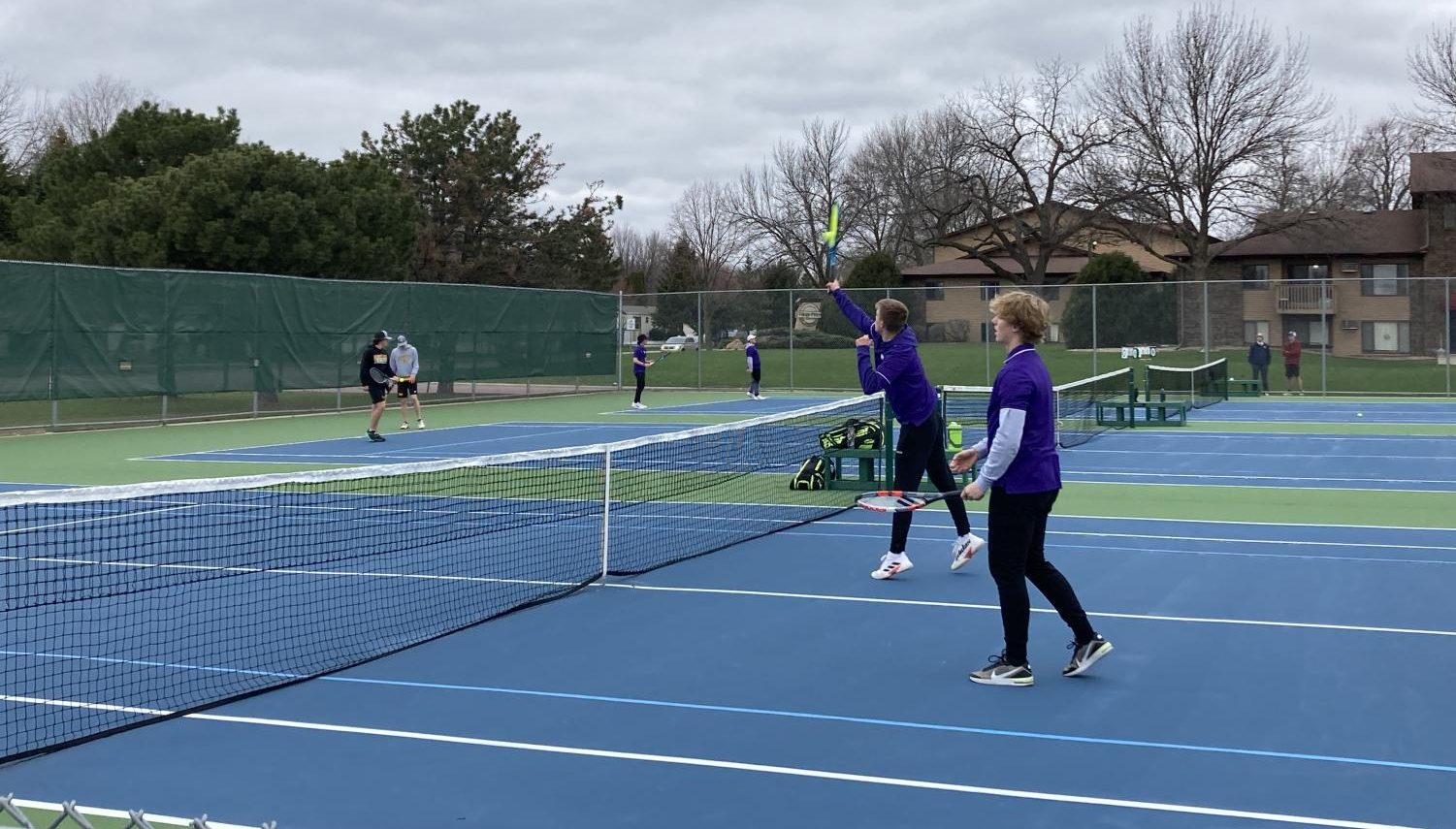 Nathaniel Janssen connects with the ball.

Nathaniel Janssen connects with the ball.

The New Ulm boys tennis season has had an interesting season with many challenges.

The New Ulm Boys’ tennis team has gone through many struggles with meets getting postponed left and right and dealing with practices indoors, but the most significant challenge might be having six new starters for singles and doubles, with the only position staying the same being doubles one Nathaniel Janssen and Leo Waloch. “Almost our whole lineup is first-year varsity players, which is exciting,” Waloch said.

One new varsity player is second-year Sophomore Joey Kotten, who has been playing doubles three with occasional singles four action. “The biggest difference between singles and doubles, in my opinion, is strategy. They are two different fields. Singles is about wearing down your opponent and just hitting it back over [where] doubles requires more teamwork and communication. You have to put the ball away from the net player at all costs,” Kotten said.

We are a close team and we always enjoy support during matches! ”

During practice, there are many drills that work on both singles and doubles gameplay. Practice begins with one on one partner warm-up where the players hit it back and forth with each other. Later on, there are games that involve the doubles court and doubles gameplay to prepare for actual matches. When it comes to JV, almost all of the games played are doubles.

“I feel like team chemistry is very important when it comes to tennis, especially when it comes to doubles, being very similar in the workplace, it is easier to coordinate and work with someone you know and like to an extent,” Freshman and JV player Samuel Chalakov said. While working on drills during practice, the team sometimes splits into two groups, JV and varsity. This allows the players to practice while working with others with a similar skill level.

Even though the team is split between JV and varsity, every player on the team is at a different place in their tennis journey. Senior Marcarious Amoah is playing his first year of tennis and is a varsity player. “I got into tennis last year during the summer because I wanted to try a new sport. After playing for a while, I realized that I wanted to be competitive and actually play for the school, too,” Amoah said. The team has had many changes in the lineup due to having many competitive players with close skill levels. Amoah has played in multiple spots and has started some games at doubles three. “My goals are to play as competitive as I can and maybe eventually play some singles.”

With all of the players and spots to fight for, it could be easy for separation between the JV and varsity players, but that is not the case for the boys’ team. Multiple players talked about how they enjoy watching their teammates after their own games. The team has gone through many struggles, but together they are getting better and better throughout the season.