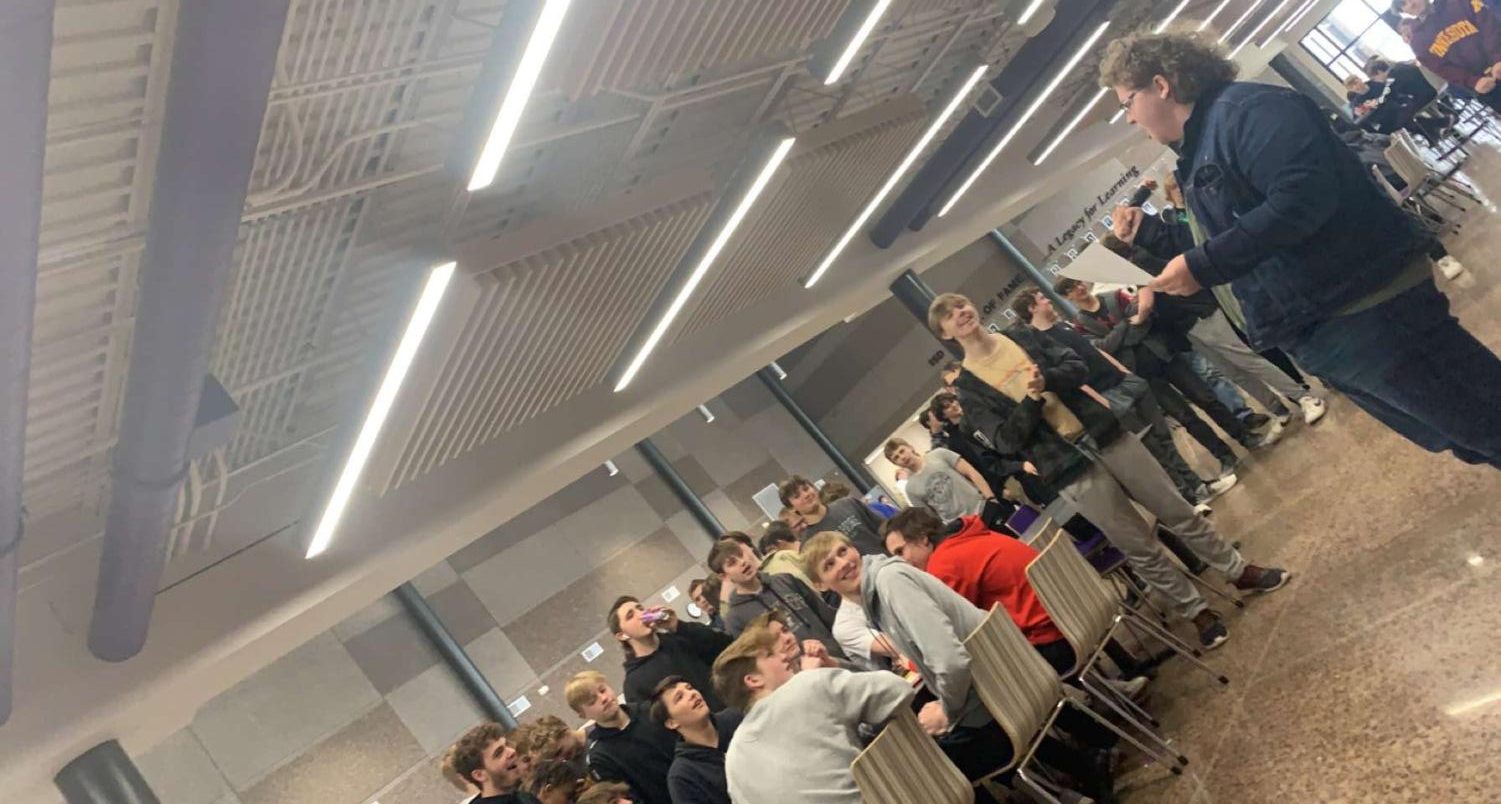 Aidan Hendrickson performs for Nate Firle, Chase Seifert, and others.

A spectacular performance was put on Tuesday afternoon during lunch as singing sensation Aidan Hendrickson serenaded spectators who had gathered around to listen. The students were in awe after listening to the songs that Hendrickson performed.

“I loved it. His presence was phenomenal, his performance was outstanding and amazing …” Nate Firle, a sophomore and supportive viewer, said. Although the show in the lunchroom was his most popular, it was not Hendrickson’s first performance in front of students.

Hendrickson has had an impact on many throughout New Ulm High School. “I’m interested in the students that are inspired by Aidan’s willingness to put himself out there and risk the criticism. Because there’s students in our schools that have other talents to share, and maybe if they see Aidan’s behavior as inspirational, they’ll be willing to share their talents with our world, too,” Hendrickson’s Probability and Statistics teacher Mrs. Rogers said.

Hendrickson performed a song that he wrote himself on Tuesday in the cafeteria. “For history class … we were doing this game … I was really enthusiastic about it, so I went home, and I wrote out an entire national anthem for this fictional country,” Hendrickson said. “I guess it was a bit more powerful than my other songs. I started singing, then a bunch of the tables around them started going like, woah yeah, sing it again. A crowd formed like I didn’t intend for a crowd to form, but I’m a little pleased with the result.”

“I want people to pay attention to me in a positive manner, and singing is a really good way of getting that response. My singing is my strongest creative muscle, it really allows me to express myself in a way that other people will find appealing.”

For some, this was their first interaction with Hendrickson’s music. “I first learned about Aidan’s singing two days ago in the lunchroom. I overheard his beautiful vocals nearby another table, so I asked him to perform for ours. Aidan’s vocals left me speechless, pure awe, amazement, all of the above. It was truly a breathtaking experience,” pleased listener Chase Seifert said.

For those who have not had the chance to hear Hendrickson’s songs, fear not. “I would not mind continuing to perform for people. I could see myself having a side gig as a street performer, but it’s definitely not my main career route,” Hendrickson said.