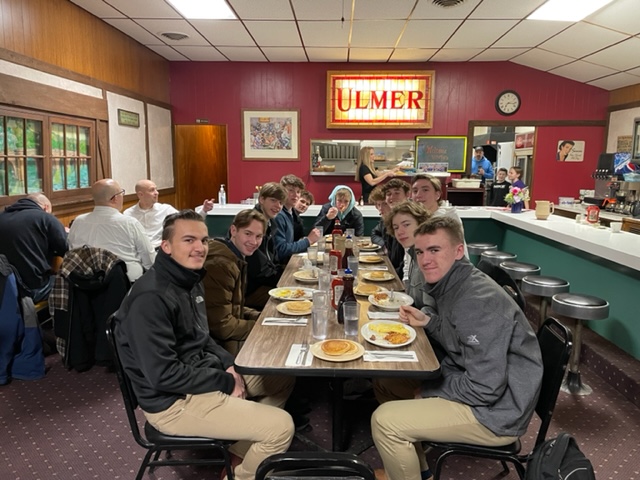 In preparation of the New Ulm boys basketball conference championship game, the team gets breakfast paid for by the Ulmer Cafe.

The good smells of an old fashion coffee house emerge from the door as the New Ulm Eagles boys basketball team enters and is treated with breakfast at the Ulmer Cafe before their conference championship game against Marshall on Feb. 18.

This is not the teams first time eating there though.

The Ulmer has been a common place for the team to go after the annual Sleepy Eye scrimmage before the first regular-season game. “We like to support our small-town businesses,” Coach Matt Dennis said. “We wanted to support them, now they want to support us, and we appreciate it,” he added.
The team has been going there every year since Dennis became the head coach and it’s become a fun tradition for the team.
The Eagles ended up winning later that night 72-61 in the conference championship game which had not been accomplished for team basketball since 1995. This was a huge achievement for the program and it all started with a little breakfast at the Ulmer.