Late start to the Volleyball and Football seasons

Due to COVID-19, Minnesota State High School League (MSHSL) originally decided to start volleyball and football in the spring instead of fall to hopefully keep the number of COVID-19 cases down. The board later took a vote in hopes to move football and volleyball back to the fall. In the end,  the board voted 15-3 to have football start in the fall again, beginning Sept. 28. The board also voted 14-4 to move volleyball back to fall with the season starting Sept. 28.

“Better now than in the spring,” NUHS AD Troy Guentzel said. “I thought it was an unrealistic expectation that it could ever happen in spring. Volleyball maybe, it would’ve been really tough to sandwich it though between basketball and our other traditional spring sports. But football, we have snow on the ground right now. What do you think March is going to be? How cold do you think it’s going to be? I didn’t see us ever playing a game if they would have kept it there and I think that’s part of why there was a push to move it. I’m happy it’s back. Volleyball is happening a little bit easier than football. Football is going to be a challenge, it’s going to be cold. It’s going to be cold for our football players, for our cheerleaders, for our fans. That might be the biggest limiting factor of having fans there – people are gonna freeze.”

There are many new guidelines for players and spectators due to COVID-19. “The first one and the biggest one probably is wearing masks on the sidelines,” Guentzel said. “So if you are not currently participating in the competition, the moment you come to the sidelines you are supposed to mask up. Coaches have to wear masks all the time regardless. Now, if you’re a spectator watching on you might see a coach pull it down but people have to understand and be flexible to the fact that this is all new to everyone and there are times where they can distance themselves enough that maybe they have to say something or take a break or whatever and they can take it off.”

Mr. Guenztel continued: “Another big change obviously is for spectators. This has been a whirlwind. I feel awful for all of our students because initially there was not going to be any spectators at any events, even outdoor. Then it became the 250 guidelines for outdoor which meant 125 from each side. So if they’re not essential to the game, meaning they are not participating in the game as a coach or a player, they’re not an official, they’re not chain gang, they’re not in the booth doing scores, they’re not administration, not a trainer, they count towards that 250. Then you go to indoor, and they said the maximum you can have is 250 or whatever 25% is of the total population you can have in there for capacity. However, then they changed it just slightly to no more than 2 spectators per participant and they wanted it to be mostly parents. So then you start doing the pass system and dealing with it.”

Fortunately for the fans, there are live broadcasts to watch of the events. Youtube live has been the current source, but Guentzel says improvements are coming. “We are having an install scheduled in November for the National Federation of High School Sports called the Pixelot System that will be permanently installed in our gym as well as out on the field. Way higher-tech, way higher quality, it has sound, it’ll keep the score going synced with it, it oscillates as it goes.”

It’s a challenge, there’s no way around it. I feel awful for our kids in the sense that this is all flipped upside down, students can’t be there, this is what high school is about”

When asked about how the volleyball season is affecting the team this year, coach Steph Dietz said, “I think at the beginning it did affect us because I think when they told us we weren’t going to play until spring you push it out and kind of forget about it and you mentally prepare that we’re going to play in spring. It took us a little bit to realize that we were going to have a season and that we get to play and get to do so this fall. It took us a little while to get going but it’s good, we’re doing well.”

“I wish if they were going to start it late that they would’ve just put it in spring or have just kept our regular season but I think it’s nice that since they started it late there’s still rescheduling for the games,” Senior middle striker Riley Melby said.  “It’s still a normal seasons’ length, it’s just at different times. It’s weird but it’s nice.” No fans in the stands has also been an issue. “You have to make your own energy kind of,” she said. “Willingness to play I guess. You have to cheer way louder to hype yourself up, and your teammates. It’s definitely a lot different from having the squadron there and your family being there to watch you.”

According to football coach Eric Kauffmann, the late start to the football season does have its effects, but not all of it is on the team’s playing, “Absolutely, I think it was a big-time effect because we couldn’t get all of our practices in to get ready for the season. I wouldn’t say were 100% but we are definitely doing pretty well. I think we are doing a fairly good job, our main goal is to run the ball and be successful doing that and we have done that at least two out of the three games”

Varsity football player Cole Ranweiler was also asked about how he feels about the late season. “I wasn’t expecting to have it. Up until the last day I wasn’t expecting to have it but since we did have it, it’s been fun. I would’ve hated it in the spring because it would interfere with baseball,” Ranweiler said. “We just practice after school like normal but it does affect how well we’re playing. Normally at this point, we would be pretty solid but we still have mistakes happening.”

Ranweiler also has some goals he would like to accomplish for his last season of high school football as a senior. “Some personal goals with the full season would’ve been to beat my rushing record for the season, but obviously with the short season it’s gonna be tough to do. I don’t think I can do it because it’s so tough, but I would like to beat my single-game rushing record for New Ulm again against Sibley East so that’ll be a game to watch.” 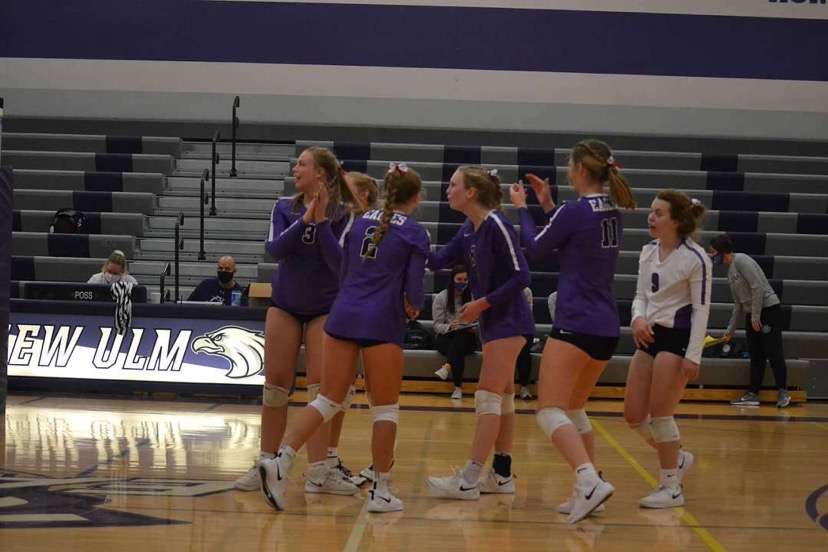