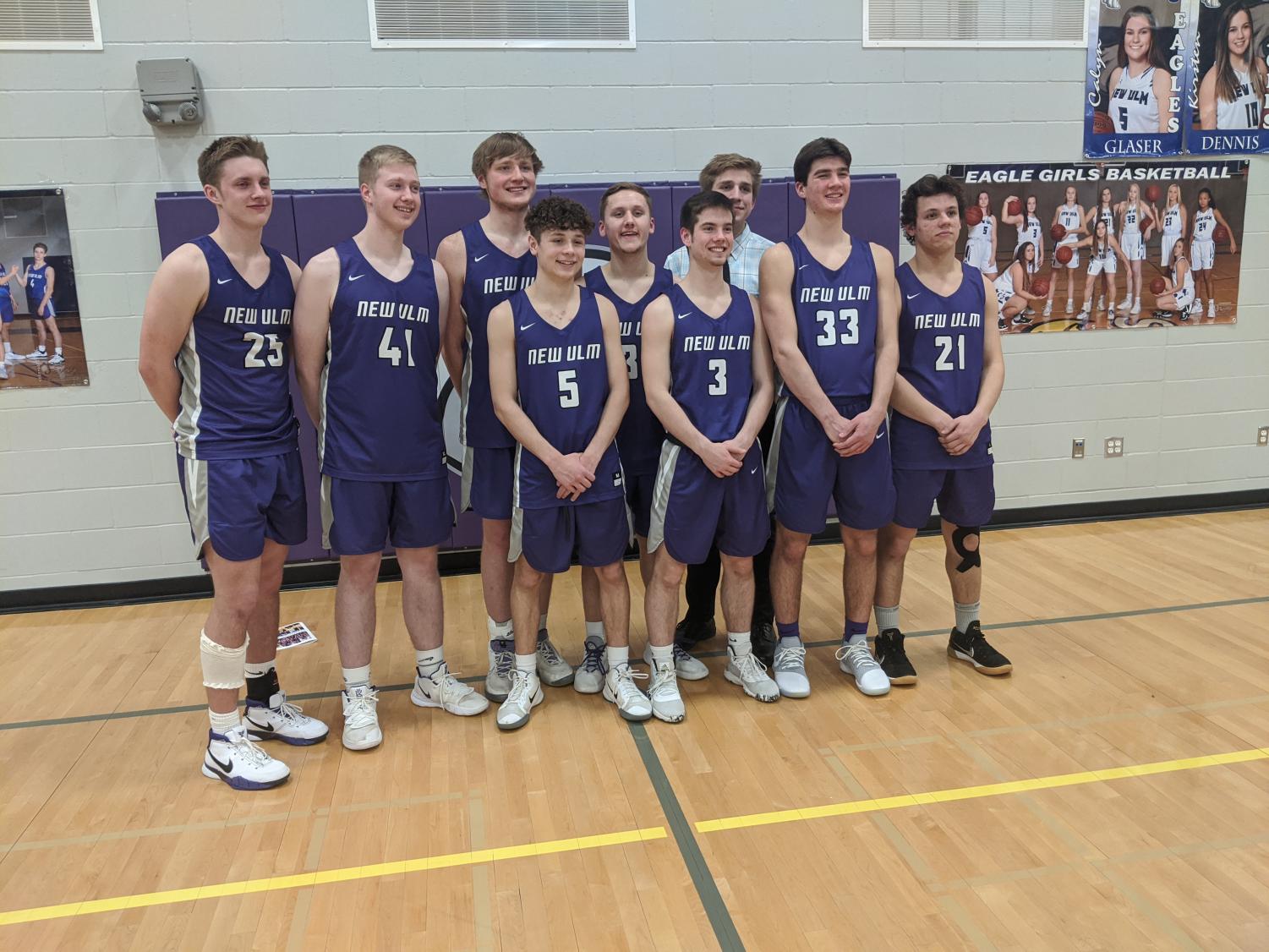 Seniors are honored at their last home basketball game.

On Thursday, Feb. 27, the boys’ basketball team played their last home game of the season against the Jackson County Central Huskies. New Ulm High School celebrated and honored their seniors by congratulating them on their accomplishments in their basketball career prior to tip-off.

A table was set up in the commons with the senior’s jersey numbers, their future plans, and their worst and best memories from basketball. Before Tip-off, there was a ceremony introducing each one of the 9 seniors individually and presenting each senior with a custom ball, plague, and white rose to present to their parents.

After the ceremony, the Eagles Squadron anxiously awaited the start of the game. The Squadron was energized and the front two rows were packed with rowdy seniors ready to cheer on the team.

Prior to tip-off, we sat down with Coach Matthew Dennis and Center Cole Rhode to talk about the upcoming game. “I’m very excited about this game tonight and I think it will be a great matchup for us. We have a lot of great shooters and defensive stoppers and I am ready to play the Huskies,” Dennis said. Rhode added, “I am also ready to play my heart out with the rest of the team and celebrate with my brothers. It has been a long journey for us and I’m proud to play for this team.”

The game started out hot for both teams that night. JCC got out to a small lead but with some fantastic shooting by Reece Melby, NUHS kept the game within five points for the first five minutes. It was not until the Huskies took their first timeout after a 22-foot 3-pointer by Melby that they took the lead and ran with it.

By halftime, the Huskies were up by 15. In the locker room, Dennis said that “we need to change the dynamic and play at our pace.” The Eagles coming out of the half did exactly that.

The Eagles crept their way back into the game and with ten minutes left in the game they were only down by nine points. However, the Huskies began to get some stops and drain some threes and ran off with the lead.

By the end of the game, some of the seniors got to see the floor to play for their fans one last time in their home gym. The game ended in a loss for the Eagles, 101-86, but NUHS was happy and celebrated their seniors for all their accomplishments this season.

After the game, the locker room atmosphere was optimistic and ready to look ahead to their playoff game. They were all ready for the first round and making their mark.

Once the team came back out of the locker room, they celebrated with the seniors by taking lots of pictures and eating tons of cupcakes. It was a very joyful atmosphere for everyone.