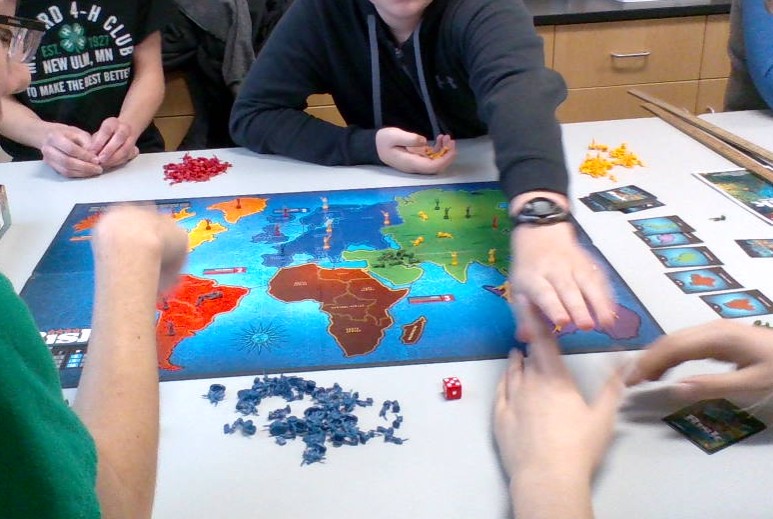 Another year to play games

At game club, anyone is welcome to come and have fun.

In the past few years, game club has seemed to be pretty popular with students. It gives people a good way to make new friends or play new or familiar games with people they already know, and it’s always a good time.

When game club was first started a few years ago by Mr. Nelson in the science wing, all that would happen is that students would grab a game out of the cabinet (usually something they liked and were good at) and play it with the same group of friends they always would.

Last year, in order to get students to expand their horizons and get them to play new games with new people, Mr. Nelson set up a system in which students were given a list of tasks to complete (for example, to beat a specific game) and if they completed said task, they would earn a number of points, points they could use to buy things that were usually related to games. If a student did not wish to participate in doing what the list said, they did not have to. However, most students followed the list and still had a great time at game club. This year things have slightly changed as you get points for attendance, completing and winning games, and playing games brought in from Dork Den, Mankato.

Every year on the last day of game club, there is a party with snacks and drinks, and an annual game tournament of Super Smash Bros (newest in the series). In past years, you only had to attend game club once in order to be able to go to the party. It is very popular because it is the only day where video games are included. Some attendees actually wish video games were always allowed at game club for all other days of the year, but Mr. Nelson believes that playing board games can build friendships (unless the game goes extremely bad), and it helps to exercise the mind dealing with strategy and quick thinking.

Game club has always been fun. It is a good way to practice my hobby and hang out with friends.”

“Game club has always been fun. It is a good way to practice my hobby and hang out with friends. It is pretty informal as long as you follow school rules, and Mr. Nelson is very helpful at teaching games,” senior Billy Wheaton said.

Anyone is allowed to participate in game club, and there are no requirements other than being a student at NUHS. It is a great way to have fun in a way some people probably thought they would never have, as video games and social media have drawn some away from just sitting down at a table and getting involved in a board game and actually having a really good time. Game club is for all those who just want to have some competitive fun with friends.