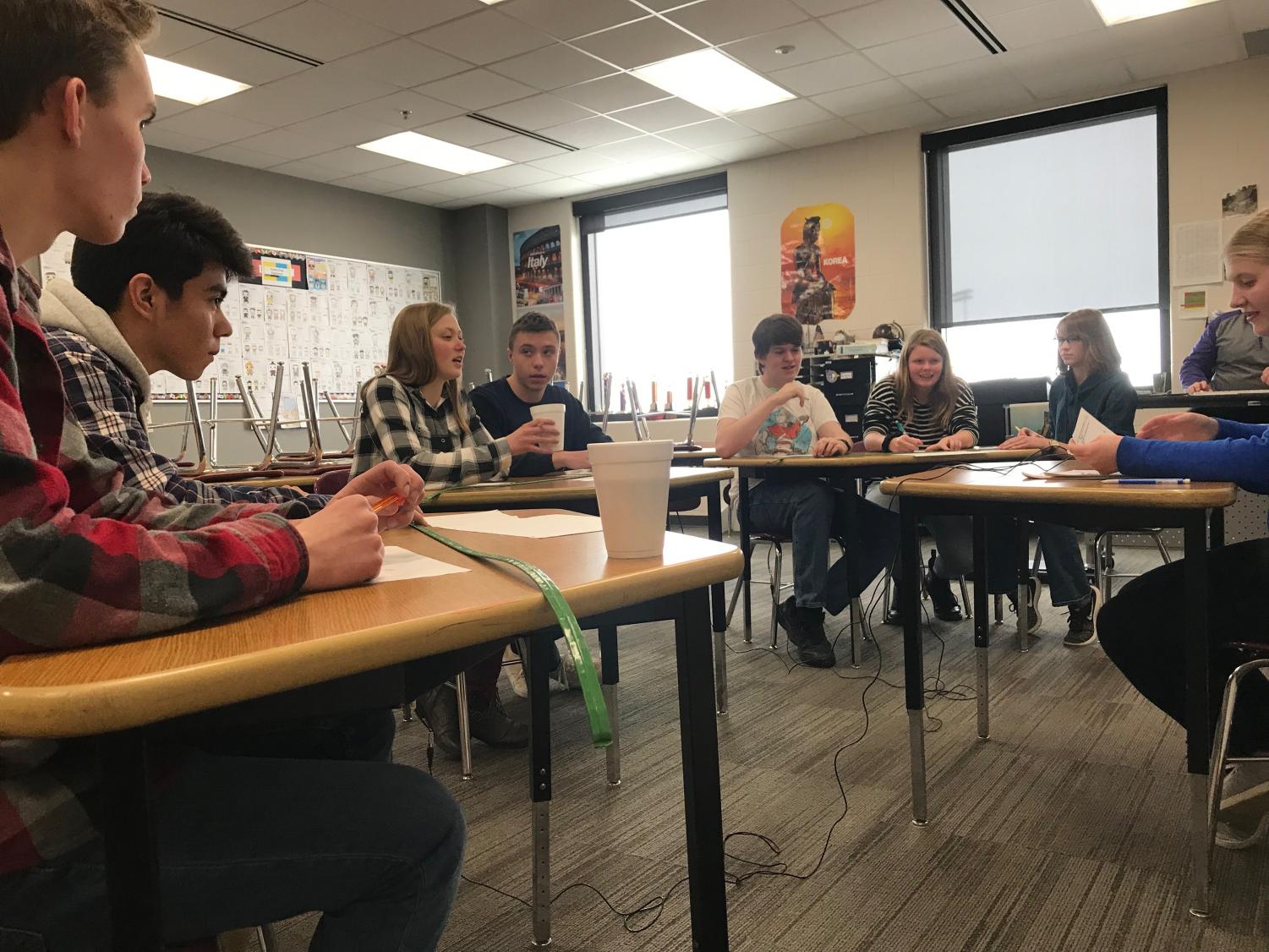 Seniors Emma Maudal and Peter Spengler, middle, have been known to know their fair share of answers to Knowledge Bowl questions.

Seniors Emma Maudal and Peter Spengler, middle, have been known to know their fair share of answers to Knowledge Bowl questions.

Bowlin’ for the Brain

New Ulm Knowledge Bowlers have been kicking it at competition with three first places.

The new year has come and with it, the Knowledge Bowl season. Starting off the season with a record of two first places and one second place out of the three meets, the New Ulm Purple team has been at its best, with an all-time regional record of 138 points. Last year, the New Ulm Purple and New Ulm White made it to state. At state, White got tenth place and Purple got thirteenth place. This year, the team is hoping to go again.

Knowledge Bowl is a quiz based game where students test their “knowledge” of a wide variety of different subjects. Generally, Knowledge Bowl meets start off with a written round consisting of 60 multiple-choice questions which can be taken by five of the team members. After the written test is scored the teams will be ranked according to their performance. The teams in first, second, and third are placed in Room #1; the fourth, fifth, and sixth placed teams are placed in Room #2, etc.

After the written round there are four oral rounds. Each oral round consists of 45 questions, broken into three sections of 15 questions. Asked similarly to the television game show Split Second!, teams can buzz in at any time while the question is read. They will then have 15 seconds to answer the question. Only four people from each team can compete in the oral rounds. One person is designated spokesperson – they give the reader the team’s answer. After each oral round, teams are ranked based on their score.

The top ten teams competing then will be announced at the end of the meet. The top five will receive personal medals and the top three will bring trophies back to their school. In one meet, the top teams did not receive trophies but instead bowls filled with candy!

How exactly does New Ulm Purple and White get ready to take those top places at meets? While most would assume it is all about the raw knowledge that wins meets, Jacob Hanson from Purple says, “Having the knowledge is important, but the most important thing is being able to communicate well and bounce ideas off each other consistently”.

Between rounds of a meet, knowledge bowlers have time to sit back and play some cards while the scores are being tallied up. Before the meets, donuts are served and the bowlers have time to go over their master strategy. After a long day of competition, if lucky, Eagle bowlers are treated with a trip to Culvers restaurant for some sweet ice cream. After all, they do deserve it after taking home the gold!