Veterans Day Honoring those who Served 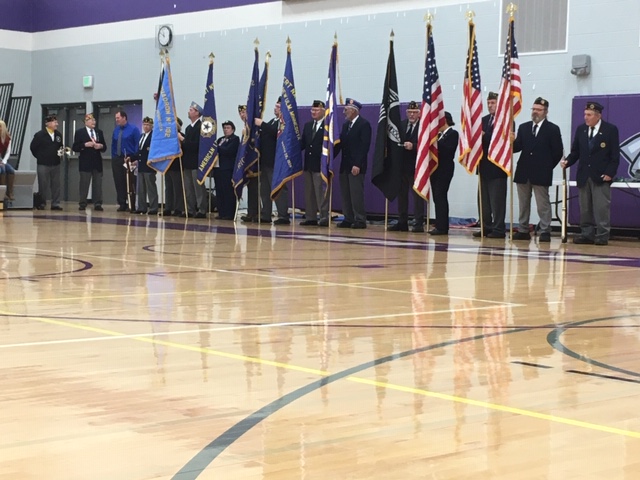 The veterans are honored every 3 years on Veterans day at the New Ulm high school with an assembly held during the third hour in the gymnasium. The procedure is that they will start out with the color guard. This is a meaningful moment for many of the veterans. After the color guard, the band will play the national anthem and the songs for each branch of the military. There are usually a couple of speakers that share their experiences and talk about what it means to be a soldier and veteran. New Ulm’s Concord Singers will sing a few songs and then the service comes to a close with the retiring of the color guard.

Veterans will view this day in many different ways. I interviewed two different veterans, one of them being NUHS history teacher Mr. Bute, to get their take on the day that honors them. I asked both of them what their personal thoughts were and got similar answers. Mr. Bute said, “honoring veterans is important and it honors more than just their service.” The other veteran said, “It honors everything we went through during duty and after,” and added, “I am always happy to see support for the vets and it shows why we are the best country in the world.”

Mr. Bute is in full support of Veterans Day as well but said he would also like to see some changes. “I feel that it is wrong for the veterans to be putting on the program for themselves; someone else should be putting on the program for them since it is in honor of the veterans.” He would also like to see younger vets at events such as this but understands that they have jobs and a busier schedule. Mr. Bute also suggested that on the years when the high school doesn’t have the program that teachers still do something in their classes to show respect and honor the veterans on veterans day.

Veterans day is a day to celebrate all the branches of the military for their service. However, it celebrates much more than their service – it celebrates all the sacrifices made in order to serve our country as well. Mr. Bute recalled his sacrifices: “I was gone for the majority of the first two years of my daughter’s life and my pay wasn’t very good; it put a lot of pressure on my wife and me while I was in the service.”