Tensions are high as students compete in the annual NUHS bean bag competition. 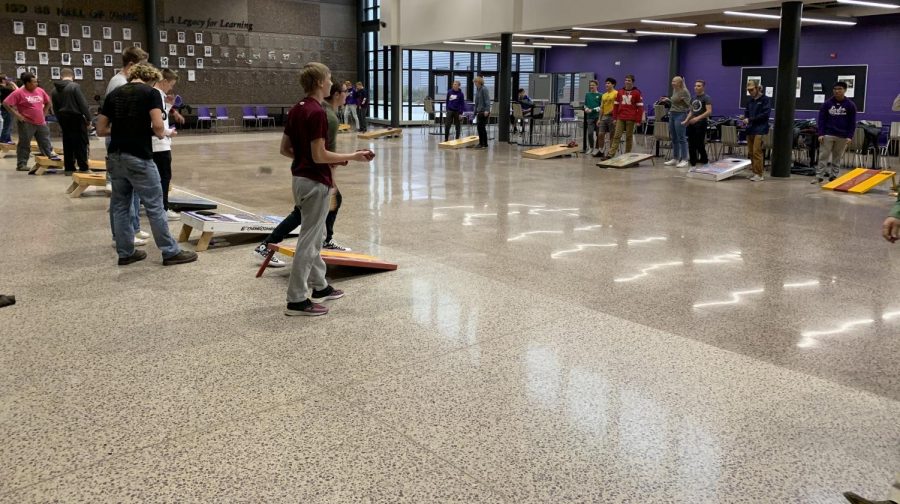 As fall sports seasons begin to wrap up, athletes and other students look forward to our annual intramural bean bags. As lackadaisical as you think it might be, you would be wrong. Bragging rights are drastically fought over, along with a ten-dollar purple and grey shirt sporting the winners as “intramural champions.” Friends and foes will battle in a bean bag matchup starting November fifth through the seventh after school in the cafeteria!

Sixteen teams are set up in two eight-team pools. Each team plays all the teams in their pool to set up a winner and loser bracket. Team’s records from the “regular season” decide their seeding in playoffs. Then it’s game on! Teams compete in a single-elimination bracket for all the bragging rights.

Veteran four-year intramural bean bag player Reece Melby said, “I love to compete with friends in activities while I’m not playing my regular season sports.” He has a simple game plan this year: “I am going to focus on putting the bag in the hole more than my opponent.” He will compete with Teagan Kamm in this year’s competition. Melby and Kamm look to take first. “You’re either first or last in this world, so we take it pretty seriously,” Melby said.

When asked about what goes into creating the tournament, Mrs. Gordon said, “The student council several years ago voted to spend some of our money to get the boards built.  The woods class built them. We saw it as an excellent investment as we use them for intramurals, and occasionally during lunch for spirit weeks. We also ordered Intramural Champion T-shirts that we give to the winners of the different activities we host.”

Brody Bolduan and Ryker Shelgren defeated Tyson Hutton and Evan Wiltscheck to win the championship for their second straight year while Brayden Geariety and Caleb Arndt won the consolation bracket.