Every year the New Ulm boys soccer team takes a trip up to the Twin Cities to watch Minnesota United play soccer. It is a great team-building activity that is fun in the process, and the boys get to learn a few tricks of the pros by watching.

The tradition started when Minnesota was in NASL (North American Soccer League), which is a smaller league. Now Minnesota is in the MLS (Major League Soccer) and has a much bigger stadium – Allianz field – and a much larger fanbase.

The soccer team also gets to have experiences that many people who go to the games don’t get to have. Some of these experiences include being ball boys and seeing the players walk by in the tunnel. Back in the NASL days, they even got autographs from players.

The Tradition started when Dave Dake took over as NUHS boys head soccer coach. In Coach Dake’s first season he took the players to Blaine, MN to watch Minnesota United play. This was back when United was still in the NASL.

In previous years, the team has gone to Minneapolis to watch United play at TCF Bank Stadium, as United’s new stadium, Allianz Field, was still under construction when Minnesota United was announced as a new MLS team. Some of the boys were able to be ball boys for the game and got to experience something quite awesome.

Last year, the boys went to TCF Bank Stadium again to watch Minnesota play. This time the boys were able to stand in the tunnel and watch as the players walked out to the pitch. It was quite a cool experience for them and for the coach.

However, this year was an even bigger year for the boy’s soccer team as they were able to go to Allianz Field in St. Paul to watch United play their last home game of the regular season. The boys were also able to be ball boys at the game, which added even more to the amazing experience. 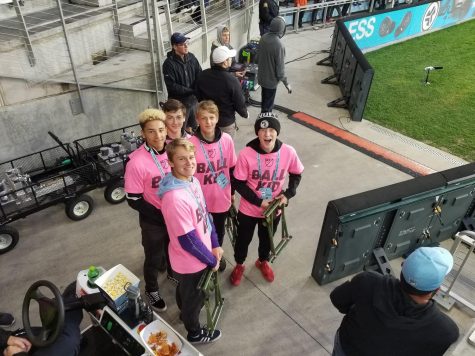 Most of the players agreed that it is pretty cool to watch the pros play live. “It’s a better experience to watch a game live at the stadium with all the fans, rather than sitting at home watching it on your couch,” said Jack Brownfield.

Coach Dave Dake is a massive Minnesota United fan. That is the main reason he started taking his players to United games. “United is my favorite team. I’ve been supporting them for years and I want the players to experience this so that maybe it will have an impact on them and allow them to have a good time,” said Coach Dake.